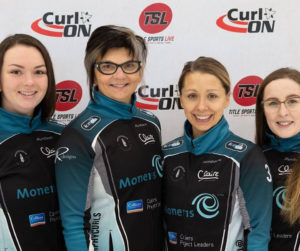 In curling, like most team sports, teammates are like family. For Team Murphy, the family bond runs much deeper.

The Mississauga-based rink features the mother-daughter tandem of Jestyn and Janet Murphy, with the younger Jestyn serving as skip and mom Janet playing vice.

“It’s a little weird, I get to boss my mom around the curling rink,” the younger Murphy says with a laugh.

And if curling on the same team isn’t enough, the mother-daughter duo also work together – in curling, no less – at the Mississauga Golf and Country Club.

“She’s my mom, she’s my boss, she used to be a coach of mine, and now we’re teammates,” Jestyn says.

Growing up in a curling family, it was no surprise that Jestyn developed an appreciation for the sport at early age.

“I started curling at five years old,” she recalls. “Growing up, at the dinner table, it was always curling talk.”

The bond the duo shares has created natural benefits on the ice.

“I like it. We’re both used to it by now,” Jestyn says. “Mom and I often know what each other is thinking because we spend so much time together on and off the ice. She’s great at knowing what to say when it’s needed and when it’s better to just let things cool off.”

While the family-turned-teammates story may be unusual, the result has been nothing but positive. Jestyn had previous played with her mom as an alternate with the Harrison rink but it was the 2018 season where the on-ice relationship took the next step. They joined as teammates and recruited two familiar faces – Stephanie Matheson and Grace Holyoke – to join their team as second and lead respectively.

Matheson had played with mother Janet for years and became a natural fit for the new rink, while Holyoke was a rival of Jestyn’s in the junior ranks before being recruited to join forces.

The combination of experience and youth produced immediate results for Team Murphy. The team qualified for the 2019 Ontario Scotties Tournament of Hearts and made it all the way to the semifinals, turning a lot of heads in the process.

“Last year, we were a bit of a dark horse. I was so young and Grace was so young. I don’t think anyone really expected us to do so well so making a name for ourselves was kind of special,” Jestyn says.

This season, the team has continued to find success on the ice as it chases an Ontario championship – something that would be a first for the entire team.

“Our main goal for the season is to win the provincial championships,” Jestyn says. “We set ourselves goals at the start of the season and that’s one of them.”

That goal is now within reach after Team Murphy became one of the first teams to qualify for the 2020 Ontario Curling Championships, taking place in Cornwall later this month. Solid showings at a number of bonspiels this season allowed them to secure the necessary points to lock up one of the qualifying positions.

Running from January 27 to February 2, the Ontario Curling Championships will see the top nine men’s and women’s teams in Ontario vying for the right to represent the province at the Tim Hortons Brier and Scotties Tournament of Hearts.

The Cornwall Civic Complex will be the site of the competition, with the arena ice being transformed into curling sheets for the weeklong event – something that hasn’t happened in over 30 years.

Adding to the unique venue is the roster of teams competing. Some of curling’s biggest names will be in attendance, including the No. 2 world-ranked John Epping and world champion Glenn Howard on the men’s side and Olympian and world champ Rachel Homan on the women’s side.

It makes for a special opportunity for both curling fans and competitors like Team Murphy, who are already training and preparing for the event with one goal in mind – a championship.

“For any curling fans who have maybe only watched on television, it’s a totally different experience,” Jestyn says. “It’s an awesome opportunity to get that up close feel with the curlers. We haven’t had many opportunities to be (playing) in a big arena like this. We’re really looking forward to it.”

Tickets for the 2020 Ontario Curling Championships are now on sale!

Full tournament passes can be purchased for $140 while championship weekend passes are available for $75 and daily passes are on sale for $30.

Single draw passes will also be on sale for $12 (only at the door during the event).

They can also be purchased online (please note additional service fees may apply).

Attending the 2020 Ontario Curling Championships? Make a night of it and stay in Cornwall! The city is home to a variety of amazing accommodations, from cozy bed and breakfasts to full-service hotels. For more information, please click here.

From casual to fine dining, local favourites to tastes from around the world, Cornwall has something for everyone. Check out one of our many great restaurants during your visit! For more information, please click here.

Looking for other fun things to do in the area? Make sure to check out our Events page for info on upcoming events in Cornwall and SDG Counties.

Do you have other questions? Cornwall Tourism can help. Email us at info@cornwalltourism.com to request a copy of our Visitor Guide or contact us at (613) 938-4748. You can also stop by the Cornwall Tourism office at the Cornwall Civic Complex (100 Water Street). The office is open Monday to Friday from 8:30 am to 4:30 pm – we would be happy to answer your questions and provide you with recommendations and information to make your visit to Cornwall even more memorable!

← Return to news
This site is registered on wpml.org as a development site.